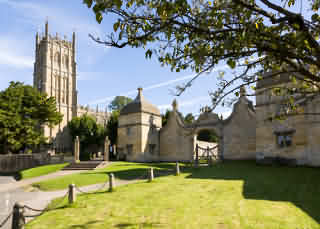 Chipping Campden was known throughout Europe for its links to the Wool Trade. The Church of St James is testament to the wealth generated by the Wool Trade. This Church is a fine example of a ‘Wool Church’ ( a term used in the Cotswolds to describe a Church built largely as a result of wealth from sheep). It is in this church that Sir Baptist Hicks is buried – he was a well known individual within the town.

The covered Market in Chipping Campden.

Sir Baptist Hicks derived his wealth from wool and was responsible for the building of the Covered Market. The local farmers would sell their produce in the market. 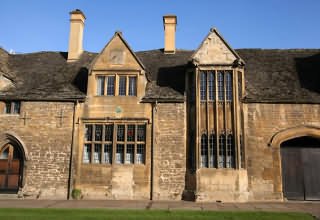 Chipping Campden boasts some fine Cotswold Stone buildings. It has one of the longest terraces of houses in the Cotswolds.  The terrace is on the South side of the main street and curves in a gentle semicircle. Some of these building have sun dials positioned so as to tell the time.

One of the Banqueting Houses – on the site of Campden House

Sir Baptist Hicks had Campden House built on high ground in Chipping Campden. The building was finished  in 1615 and 30 years later was it destoyed by Royalists in 1645 when they left the town. There are only ruins of Campden House but 2 Banqueting Houses still stand in the Estate’s grounds.